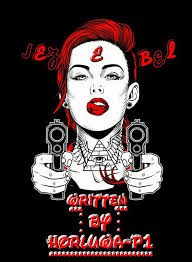 ” what could be happening ” Usman asked looking surprised.

” or Ben is dating the two girls ” Samuel said with his hands placed on his waist as they stand in front of the gate shielding the house from the street.

” taa, how could you say that, we know Ben doesn’t have the mind to date a girl till he met Jezebel not to talk of dating two girls at once ” Usman retorted.

” but this is kinda confusing ” Samuel said staring at the gate, like he could see through it if he concentrated his stare more on it.

” he must have gotten an emergency call from Precious when he was with Jezebel and had to swiftly come down here to attend to her ” he added.

” and since we’ve been together, have you ever seen him going to Precious house ” Usman asked staring at Lekan deliriously.

” like he’s ever slept outside before, it’s a day some things start ” Lekan retorted.

” stop all this bickering and let’s know what we’re going to do ” Samuel lashed at them.

” what’s there to do, we’re already home, let’s leave him to enjoy himself, while we return home ” Lekan replied.

” we’ve got to confirm first, I don’t feel good about this ” Usman retorted.

” if you’re keen on ruining his enjoyment, count me out ” Lekan said leaving the two of them.

” I think we should just leave him and go back home ” Samuel said staring at Lekan who was heading home.

” even if he’s inside enjoying anything, let go inside first and confirm it, after that, we can go home ” Usman replied, knocking the gate at once, not waiting for Samuel opinion.

After knocking it for many time without anyone opening it for them, Usman brought out his phone and called Precious number. He called it for four times but she didn’t pick up. He then decided to call Ben’s number.

” whose phone is that, every phone should be placed on silent when we’re on a mission ” Flexii barked angrily as a phone suddenly started ringing.

” chilax, the ringing tone is not sounding from anyone of us here ” Precious replied.

” I think I know where ” Precious said pointing at where Ben and Jezebel were placed.

I can’t express how I felt when my phone suddenly started ringing inside my pocket, my heart ceased working at once, I wished I had placed it on silent.They we’re quick to hear it as a brief uproar suddenly ensued between them but it wasn’t long before they knew it was from me.I saw one of the girls coming towards me and I swiftly shut my eye, she changed my position so that she could be able to remove the phone from my pocket and returned to her colleagues with it.Before she got there, the phone had stopped ringing , she handed it to another lady.The person that called me didn’t give up as he or she started calling again.

” he has picked it ” Usman informed Samuel , placing his phone on speaker as the called was answered after trying the number for the second time.

” hello Precious, why are you with Ben’s phone ” Usman asked.

” he just left for the gent, so I decided to answer the call since you’re the one calling ” Precious replied.

” okay, I just wanna check on him ” Usman said.

” alright, I’ll inform him that you called when he’s through ” Precious replied.

” alright, but where are you guys ” Usman asked as he was about to drop the call.

” we’re in church, we are having a program ” Precious replied.

Samuel suddenly bursted into laughter as Usman dropped the call.

” we should have listened to Lekan and gently return home ” Samuel said still laughing.

” what could be happening, Ben isn’t someone like this ” Usman uttered with a confused expression.

” well, he is now, see the kind lie wey them they lie, I’m sure Ben is beside her right now, maybe on her, self ” Samuel said still laughing.

” I won’t judge yet till I see him ” Usman replied.

When I was sure that she had returned to her colleagues , I opened my eye and was surprised to see Jezebel in front of me.The girl had tossed me to the other side when she withdrew the phone from my pocket. She’s been beside me but I didn’t know because of the position I was.

Her hands and legs were also in bondage like mine and She was still unconscious.

My phone started ringing again and one of them answered it.I didn’t care to listen to what the person was saying as I was worried about Jezebel. She seemed to be lifeless.With a lot of strength, I dragged my body closer to her.

She opened her eye as my body collided with hers.Her eye was kinda blurry at first but at once as she got hold of the situation she was in, she opened her eye wide and started making a muffling scream due to the tape on her lip.

” looks like they don return back to earth ” I heard behind me from the ladies .

” Pinky, Lisa, go and bring them here ” another voice which was kinda familiar ordered.

Two ladies moved closer to us, loosened the rope used in binding our legs and took us to the midst of the ladies.

They formed a circular shape, with a black ribbon on their head, and the one who looked like their leader was backing us.

We were made to kneel down in the midst of them.

” they’re here Jezebel ” one of them said, I thought to the one backing us.

” okay ” the person replied as she turned to look at us in a slow motion manner.

I was left in awe and couldn’t believe my eye when I saw the person.It was Precious and she also has a black ribbon on her head which had the logo of the black widow on it .

She made a sign to one of the ladies and the tapes on our mouth was removed from our lips.

” Precious ” I murmured, before I could know what was happening, a thunderous slap landed on my cheek.

” Jezebel, not Precious ” the girl that slapped me barked at me.