A Quirk of Fate Episode 4 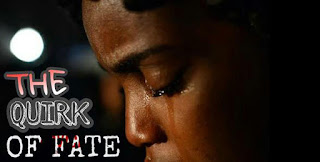 “The same way you allowed my blood to be shed this night daddy. You exposed me to evil because of your alcoholic pride. See, what has happened to me.” I said, looking back to face him scornfully.“I am doing this for your good” he said again but I turned back sharply again and hit the shelf with a great bang. The pain rang in my brain. But my mouth wasn’t numb yet!“You are doing it for yourself sir! For your pride! For your good! What would your colleagues say? What about the mass media? So, let’s cover it up. Isn’t it?” I hit the shelf again.I hurt my hand but the look on Edward’s face showed there was more to it. Then, I looked at it and saw blood gushing out of it. I smiled devilishly.“Is it this bleeding alone you see Edward? Is this the only one you see?” I cried as I pulled at his clothes. He didn’t struggle with me. He didn’t cry. He didn’t look at my face.“My hymen bled today. My heart is bleeding now. Those don’t matter to you? Edward, it’s this wound that matters?” I cried again, hitting him with my wounded hand and staining his clothes in the process.“I am sorry” he said regrettably and I wanted the whole world to come to a standstill.Sorry? For what? What can sorry do in this situation?I went back to bed again and I started somersaulting on it. I thought it might just perhaps be a dream and that Emerald would soon come into the room and say ‘Lil Sister, it’s your wedding day. Wake up’.I thought blood had just ran into my brain that I didn’t know what was right or wrong but I was just so wrong. It was all happening right before me.I wished I was never born to my dad- a strong alcoholic, boastful soldierI wished I never told him about my sexual sanctity!I wished I never met Edward talk less of falling in love with him!I wished I never met Esther, Edward’s sister who match-made us!I wish we had just had a simple wedding in Germany!I wished and wished but my wishes were just there in my head!Edward held my shoulders and I relaxed a bit, the cobwebs that had woven round my heart cleared gradually as I looked into his face. He wiped my face and tears flowed down his face too.“I know you know I really love you. But Princess, I can’t do this. If you love me, you should understand me” he was saying and I smiled painfully, tears welling up in my eyes. I nodded like an agama lizard as I looked at my sisters that were already crying.“Why is everyone crying? I understand perfectly” I said, laughed incoherently and stroked Edward’s full hair- what I adored the most in his body.My heart felt like iodine had been poured on it and it was shrinking really badly!“Thank you for understanding me dear. I really wish I could bear it too. But I won’t tell anyone, not even my parents. I would go back to Germany now and when it is morning, you guys could just raise an alarm that the groom can’t be found.” He said and I looked at him with a widened mouth.My dad clapped his hands in agreement, blowing his wound as he did.Where did this idea come from? Was this the guy I really wanted to marry? Was he the one devising such scheme as this?Jesus Christ!He stood up, arched his brows and shrugged.“That is the best I can offer now. Thank you. Accept my condolences about the whole thing and I pray you a bright future” he said as he walked out of the room, banging the door behind him.“Edward! Edward!” my sisters called out but I was calm.Something had come over me.What was wrong with me?I moved closer to the wardrobe, picked up some undies which I wore. Then I picked up one of my evening gown and wore it hurriedly. I slipped into my fine slippers, picked up my purse and smiled at the faces gazing at me.“Dad, where is the guy you dragged away from here now?” I asked and they all looked at me, shocked.“Omo mi, I know how you feel now. But at this point, there isn’t anything you can’t do now if you catch him. Please, let us wait on God and think about how to even face tomorrow” my mum said as she rose up from her kneeling position.“Tell me where the guy is while I ask gently dad” I said again and he raised his hands up in surrender.“Briton’s pen!” he said“What!” almost everyone exclaimed widely and I opened my mouth wide.My dog was so dangerous in that hole-like prison that my dad called a dog’s pen. It had attacked lots of people before cracking their bones.That’s worse than death itself!The dogs must have broken two or more of his bones by now.“But dad, you are very proud and selfish o. why didn’t you shoot that guy? Why didn’t you hand him over to the police?” Ruby asked and my mum shook her head in regret.I wondered where my angelic mother met this talkative alcoholic!“It is alright. Let’s ll forget about this. Mum, you better start sending messages to people that the wedding has been canceled. I don’t even know what to do. I will be back. I need to put some things in order” I said as I walked out of my room.“Princess!” Ruby called out“Sis” Emerald called out“Jesu Oluwa mi oooo” my mother wailedI could hear their footsteps behind me as I walked out of the room but I was unstoppable.I moved to the living room and to the dining table and picked up a sharp knife which I hid in my purse secretly!God, what exactly is happening in here and to me?Have I lost it?Of course yes!I had lost it, and I had lost it all!!