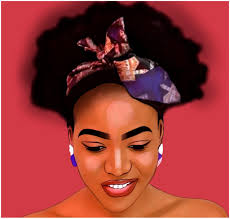 By Lady C 👄 (Lilianna)..Hannah's pov ✍️"Hannah.." Amaya called, I stopped and turned to look at the little beauty"Yes baby..?" I answeredShe walked towards me and gestured for me to squat a bit.. I did and she placed her hand on my stomach, then kissed it.. I looked at Harry, who had his lips parted slightly, her mother blinked and I smiled.."Bye.." she said and pecked my cheek"Bye" I said and stood up then walked back to Harry, he stared at me and I smiled lightly, he looked back at the little damsel and waved..We were about to get into the car when we started hearing noises.."Uhm.. what's that?" I asked looking towards the direction,"I don't know.. I think they are fighting?" Harry mumbled "Let's go check it out" I said and tried moving out"What?" Harry asked pulling me back"Oh come on Harry, we'll just check and come back.. it will be quick trust me" I said and ran off pulling him along with my super strength........We got to the spot and saw a crowd gathered around something or should I say people.. "Hey, excuse me.. what's happening?" I asked a young boy standing beside me"..these thugs are at it again miss, they are always terrorizing us.. they work for the moneylender, and he always sends them to come beat up any client, who doesn't want to pay.. now they are beating that poor woman" he said"What?" Harry mumbled, I breathed and moved through the crowd to the front..There on the floor was a woman bleeding seriously, with four men hitting and punching her.. I clenched my fists and made to move, Harry held my hand and looked into my eyes, I could see the fear in his face..Without a word, he let me go and I moved forward..I tapped the first man I could reach.."Hello" I said he turned and my fist connected with his jaw"And good bye" I added as he fell unconscious on the floor..the crowd gasped and the three turned to look at me, "I'm gonna count to three, and if you don't leave this place.. you're all going to be sorry" I said looking at my nails.."And who do you think you are?" The one with a stick asked, "Wonder woman " the other with tattoos muttered and the trio started laughing"Hey, girl.. if you weren't pretty.. I would have beat your brains out, run along before I change my mind" the last one said."One.." I said still looking at my nails"I'd run if I were you" Harry muttered "Run?.. from.. who? This little girl?, What makes you think she's capable of fighting the three of us?" The first one asked"Two.." I said and cracked my knuckles"I warned you guys" Harry muttered again.."Hey!.. enough of this, get out of here now!" The third one shouted🚹 I really pity this girl they are gonna kill her🚹Look what her stubbornness would give her🚹How can she fight these thugs, they'll kill her for sure.."Three" I mumbled and darted my eyes to them.. The woman on the floor was trying to crawl away and the guy on tattoos grabbed her hair and pushed her down.. he raised his shoe and was about to bring it down on her head, I frowned and rushed towards him.. I grabbed his neck and hit him hard on the floor, he rolled over and blood started gushing from his nose.. I felt something like a tap on my back and turned to see the guy holding sticks.. his eyes widened as he stared at the stick and then at me.. he tried hitting me again, I grabbed the stick in mid air and kicked his stomach with so much force, that he went tumbling down and doubled over to grab the stomach.. the tattooed guy stood up with blood still rushing from his nose, he and the third guy charged at me.. I quickly divided the stick into two equal halves and swinged it.. they got to me and I started hitting them both with the sticks.. I flogged the both of them and they both fell on the floor with no more strength left in their bodies.. i looked around and threw the sticks away when i didn't see any other threat.. I dusted my hands and turned to the crowd who had been watching the whole scene with different expressions.. they suddenly started clapping and I smiled and gave a little bow..I looked around and saw Harry helping the woman into an ambulance..He turned and smiled at me, I watched as he made his way towards me and hugged me.."I'm so proud of you" he said"Me too" I mumbled and he chuckled..".. take that, and this.. that's what you get for being mean you rascals..next time take someone your own size" a teenage girl said hitting the guys on the floor..The man with tattoos groaned and she ran away with a shriek..I and Harry laughed and turned to leave.."Uhm.. where did we come from?" I asked looking at the unfamiliar environment"..I think it's that way . No this way.. wait I don't even know" Harry mumbled ruffling his hair"We are lost!" ...To be continued
See Also :