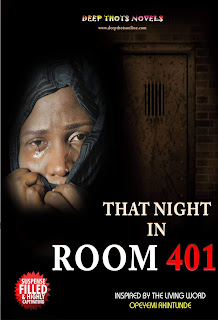 ©Opeyemi AkintundeThere was no expression on hisface, the moment our eyes met,he was looking at me intently, likehe was searching for something,but suddenly, he shook his headin the negative and turned back. Iwanted to call his name, but the officers told me to enter into the van… Ilooked through the hole in the van trying to follow him, I saw him faintlyhitting the tire of the vehicle angrily, just then I saw Doctor Jack pattinghim by the shoulder…I knew it… that was Daniel, so Doctor Jack did not kill him? So what wasthe story about Daniel having a wife and two kids…? The van moved awayfrom them…As I walked into the prison gate, I received different looks, some werewelcoming, and others were criticizing. Some were singing some of mysongs and I waved at them. I was taken to a VIP prison room, where I hadtwo other roommates. One of them was the wife of a former governor andthe other a wealthy businesswoman who poured acid on one of her staff,who was sleeping with her husband. The wife of the former governor waswelcoming, but the businesswoman was not. As I got in, I fell on my kneesand I thanked God for what he had done for me, the Mercy he had shownme and the new phase of my life.I thanked God for not letting Daniel die, and I prayed hopefully that PastorJames was not dead too.I was happy. I got a special gift from the Judge’s daughter…it was aparcel. On opening it, I saw a Bible, and a jotter with a pack of high quality pens pens. There was an attached note...“Aunty Grace,Your ministry changed my life, from SS to AA. I am a testimonyof your ministry. So, I need you ma to keep writing your songs, I willbe sending you this jotters every month. The world is yet to hear allyou have within you… love you ma. You are a champion.´Joyce George.For me it was a special gift, I sat down to write my first song, the one Ireceived when I was given the Judgement of Mercy I received…I had spent three months in prison, and I was having the best time of mylife, fellowship time was always great. I was the praise team leader. I hadwritten over 200 songs in just 3 months. The oil of inspiration wasoverflowing in my life. I was going to the studio the next day to record 3songs. I was so full of joy in anticipation of going to the studio.We were having our fellowship, when I heard my name over the publicaddress system. Who was here to see me? Was my thought. Ever sinceI got into prison, I have only had three visitors, only three people were onmy visiting list…my sister, Morountodun, Baba Prayer and Joyce George.One of the warders came to pick me to the waiting room, where theinmates met with their visitors. I stopped in my tracks when I saw DoctorJack and Daniel’s Mum, I looked around if Daniel was around, but hewasn’t.“Doctor Jack, thank you for keeping Daniel alive!, Mama I am sorry forwhat I asked Doctor Jack to do”“I am sorry for lying to you… I just couldn’t kill him, but I was scared youcould kill him instead…”“It’s ok, you were more righteous than me… please tell Daniel to pleaseforgive me, because he doesn’t want to speak to me…“That’s because he doesn’t recognize you” Mama said, talking for the firsttime“What do you mean by that?” I asked“After coming out of his coma, he lost his memory…”? Doctor Jack saidI was shocked to my bones…“Wait, then what is the thing about his wife and children? I asked very confused..The moment your mother in law found out that was his situation, shecame up with the idea that she would get a new wife and adopt two kidsaged 1 and 3 from the orphanage and I was to present her to Daniel ashis wife.” Doctor Jack said“I wanted him to have a fresh start and life was going on great for him tillyou resurfaced again.” Mama saidWow…was all I could say, Hmm… God gave Daniel a second chance, butas I was thinking about the new development,Doctor Jack said “But there is a slight problem, from the day he saw you at the Prayer Mountain, he had been troubling everyone that he knows you from somewhere, but he can’t remember it. He went to buy your Video CDs and plays it all day. This has been giving him a lot of migraine, so the reason why…” Doctor Jack was saying before Mama cut in…“The reason why I am here is that I want to bring him to you and please you need to tell him, you don’t know him… There is no future with you both, you are in prison therefore you both can never marry. Let him enjoy the new life God had given him…” Mama said pleading on her knees…I was confused, Mama was asking me to tell a lie, another sin… I couldn’t... just one night of adultery had brought me all these woes, Now she wanted me to add lies again.. .No way! I had to do what Pastor James had said I should learn to do… I was going to say a capital NO to this request...At this point in my life I was avoiding sin like a plague…“Mama, I am sorry I can't tell a lie, please don't bother bringing him here........ I don't have a problem with him marrying another woman but I can't tell a lie............... "I stood up and asked the warder to take meTo be continued...........
See Also :