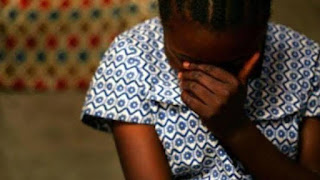 Opeyemi Ojerinde Akintunde
Mr. Gbesan was spoiling me silly, with gifts, text messages and Love. Henry had started replying my early morning text to him, although it didn’t mean much to me, as Mr. Gbesan was the real deal.
One day he invited me over to his house so I could know where he lived, although no one could say they didn’t know where Mr. Gbesan was living in that vicinity as his house stood tall among all the houses in the environment. I knew he meant something deeper, my desires and little devil in me, felt “What the heck?, Just once won’t hurt, at least that way, I will get even with my husband, he is having sex outside marriage, having once won’t hurt”....the little devil in me called self was telling me.
I had started having deep longing for Mr. Gbesan, so His invitation was a long awaited one…It happened one evening after the day sales. Gold and Emerald were packing up and washing up. I told them, I was going for a stroll.
I went to Mr. Gbesan’s house instead. Obviously, Mr. Gbesan had seen me through his CCTV camera, because he was the one who came to open the gate by himself. You could see he was so excited to see me as he ushered me into his house. The living room was not tastefully furnished as I expected, but as he took me upstairs to his Private Living room, it was literally heaven on earth.
We chatted and chatted about different things, he told me how much he loved his dead wife. He said he had not fallen in love with any other woman after her death, and I was going to be the first after seven years.
That brought up all our pent up emotions, as he moved close to me, I was gone, no form of caution. We kissed, Kissed, Kissed and I was so wanting more. We had done roughly 10 minutes of deep kissing and romancing before he started unbuttoning my shirt which I didn’t oppose too, but he stopped suddenly….
“No….I made a promise to Gold…I don’t want to hurt her” Mr Gbesan said
And unbelievably I said,
“She won’t know” I was enjoying the evil thing...
“I always keep my word Betty, I love and repect you, I am giving your husband 2 years” He said looking at me straight in the eye
Suddenly, I felt ashamed and buttoned up my shirt. I looked at my wristwatch as an excuse not to look into his eyes. 10:30pm….
Oh my God! I had spent over three hours without knowing the time was far spent, my daughters must be worried sick as I just told them I was taking a stroll… I jumped up, ready to dash down to my house..
“I will drop you” He said
“Gold will suspect….” I said as I rushed down his staircase
“That’s true, I will drop you off some blocks away from your place” He said running after me
I smiled to myself as I was amazed at how my Precious Gold had created her fear in the heart of a big man like Mr. Gbesan…
******
As we drew close to my house, I noticed a small crowd in front of my gate, what was happening? My heart started pounding, What was wrong with my girls?, Did Emerald have an asthma attack again? I told Mr. Gbesan to stop the car as I raced to the house, I pushed the crowd aside only to find my Precious Gold on the floor.
From what Emerald was saying, when they had waited for me for over an hour and I had not returned from my stroll, they decided to go look for me, but Gold insisted Emerald should stay behind. It was just now, a group of women brought her back saying they saw her on the floor in a dark corner crying…I saw red blood on her dress…
Oh No! my Precious Gold had been RAPED, because of my stupid longing for intimacy and thirst for wanting to get even with my husband...
To be continued....
Read other parts of this inspiring novel and other stories on the author’s timeline on Facebook @Opeyemi Ojerinde Akintunde
DEEP THOTS
Inspired by THE LIVING WORD
Written by Opeyemi O. Akintunde
Facebook Opeyemi Ojerinde Akintunde
See Also :