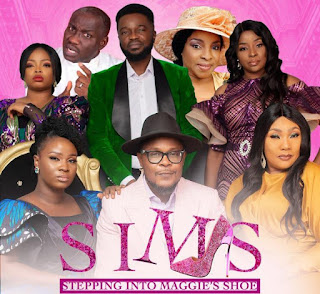 Ray kept to himself for two days, as the thought of losing everything he had was too much for him to bear. He told me he was going to ask for the Mercy of God and permissive will of God, to let him Continue with his ministry.

I tried talking him out of this, telling him it was better to obey the will of God 100 percent. I was not planning to be like Pastor Maggie who acted as a Jezebel of a wife, who made her husband sin against God. For those two days he locked himself indoors, I was fasting, asking God for a second chance for him. I cried unto the Lord telling him, I know I got into this shoe of marriage thinking it was going to be glamorous, but on getting in, it felt like stepping on broken glass. I told God I was going to stay in the marriage, but I needed him to help me work on Ray, so that I could still make something meaningful out of the oversized shoes…

On the third Day, Ray came out of the room and told me he was ready to go to Ikeji Arakeji, and he would love me to go with him. I was excited God had done what I prayed for. I put a call through to my mum, asking her to please come stay with the triplets, but she told me she was very ill.

There was no one we could trust the kids with, I suggested his estranged sister who was living close to us, but he refused. We decided to take the triplets along, but drop them off at his mother’s place at Sagamu. On getting to his mother’s home, we explained all that had happened and what we were about to do, his Mother was excited, she started jumping and praising God. In excitement, she said she was going with us, she said for years she had been unhappy about the church he established, she saw what happened as God’s show of Mercy towards her.

We couldn’t go to Ikeji- Arakeji that day anymore. Early the next day, we set out and got there in peace alongside my mother in law and the triplets.

On getting to the Church Premises, Ray kept exclaiming “Ha! Ha!” repeatedly. When I asked him why, he said the church had become bigger than how he left it. He said it was 6 times bigger than how he left him. We asked the church secretary on how to see Baba Fire, but she told us, we had to book an appointment with his P.A for over a month, as there were people from all over coming to see him, but on seeing the triplets, she showed compassion on us by giving us a way out…

“There will be evening service today, the moment Baba is rounding up his message, go and stay around where he parks his vehicle. The moment you see him coming, start shouting his name and your name telling him the reason why you are here to see him, if he is interested in seeing you, he will ask his security to call you.”

I could see that Ray felt belittled by that Approach, but I held his hand and gave him a smile of encouragement.
We stayed in the church premises till the evening service, few old members recognized Ray and they exchanged greetings. Some shared their condolence about Maggie‘s death. Others praised him over his ministry as they confessed they watched his T.V broadcast anytime they were in Lagos.

The service was a glorious power packed service, and the icing on the cake was Baba Fire’s ministration. At that Point, I knew why they called him Baba Fire, he was a mobile fire carrier, and I could see who Ray took his preaching style from. Baba Fire was a thorough Bible teacher. At some point, Ray could not help his tears, he kept crying in the auditorium, he was attracting a lot of attention, I had to pull him out.

“Happy, Baba Fire now speaks English, even though he still uses an interpreter” Ray said in tears with disbelief and regret in his eyes. Baba fire was still preaching in Yoruba language with the help of an interpreter who interpreted in English, but at intervals Baba Fire spoke fluent English. From that I learnt no one was indispensable…

We followed the advice of the secretary and stayed around his car. The moment Baba Fire came out, Ray started shouting

“My Father, Baba Fire, I am back, it is your first Son Raymond, Just like the Prodigal Son, please I am back” Apostle said in Yoruba, and I couldn’t help but cry, I felt the shame, I knew it took a lot for him to say those words, he had gotten to a high point in his life and ministry, but all of a sudden, he realized God was never with him… Baba Fire stopped in his tracks, he recognized the voice, he looked around and saw Raymond, but you could see pain and hurt in Baba fire’s Eyes. He turned away from us and entered his car….

Feel free to share the free episodes of our E-novels but do not edit the credits of the author. That is stealing and scripturally there is a curse upon the household of anyone that steals. Check it out in the Scriptures.