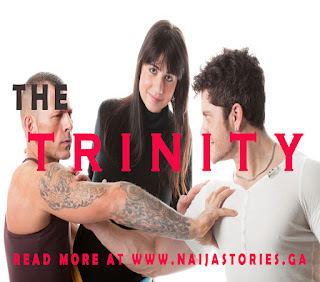 She sat down and placed her handbag beside her.

“Sorry for keeping you waiting, I had family matters that I had to attend to.” Helena apologized.

“No problem, I haven’t been here for long either” Said Michael.

“Have you seen your brother lately? He hasn’t been home for the past two days. Do you by any chance know his whereabouts? Helena asked.

Michael was astonished that she would be asking him such a question. “I’m the last person you should be asking the whereabouts of your husband” Michael said. “Anyway, the last time I saw him, he was around my girlfriend. I’m not so sure of their relationship” He continued.

“You have a girlfriend, Michael? And you are bold enough to tell me” Helena said.

“You haven’t been around lately, besides we needed a decoy.” He said.

“Helena, that should be my own problem. I am running late for work. Already, my job is on the line. Let’s be quick please. Did you bring it?” Michael asked.

“That’s all you think about right? Anyway I have it here” Helena said. She opened her handbag, took out a wad of notes and handed it over to him.

Michael counted the money. It appeared it wasn’t the total amount that he had been expecting.

“This is half the amount you are to give me Helena, I need all the money” Michael said, looking anxious.

“Don’t try to be a smart boy, you know where to meet me tonight. Show up, then the rest will be given to you. It’s as simple as that.” Helena retorted.

Having said this, she took her hand bag, blew him a kiss and walked out of the restaurant. Shortly afterwards, Michael followed and set off to work.

He wasn’t sure what he was going to face at the office and that made him very nervous. What explanation was he going to give Joe the Manager to save his job? His threat was very clear and it got him thinking. Worse yet was how Amah on the other will handle the issue.

Back at Sophie’s apartment, she was pleasantly surprised to find Jason at her doorstep. She warmly welcomed him to her abode.

“I’m very glad to have found you. I had to retrace my steps to the scene of the accident and then to your office.” Jason explained. “I lied to the receptionist that I was your cousin from out of town. The tough lady refused to give me your address until I showed her your phone number.”

“Oh! That’s so thoughtful of you. Thanks for coming,” Sophie said.

They made some small talk and then Sophie suddenly went pensive.

“I have two questions for you Jason. How do you know Michael? Sophie asked.

“I see he hasn’t told you anything” Jason said.

“Yeah, except that you are a happily married man with a kid.” Sophie said.

Jason wasn’t surprised to hear that from her.

“Yeah that’s true. I’m not surprised he mentioned that bit. I was pretty sure that he’d be quick to do that. He is right; I’m a married with a son but as for happiness – that’s something I am not so sure about. Hey! Come to think of it, why are you dressed in black like someone mourning?” Jason asked

Sophie face suddenly darkened and she looked sad. It was obvious to him that the question had hit a raw nerve.

“What is it Sophie? Is something wrong? He asked.

“It’s my sister, she is gone. She passed away that day you dropped me at the hospital.” Sophie said.

“Wow Sophie! That is so sad.. I can assure you though that she has gone to a better place. She is resting in peace.” Jason said trying to console her.

“Thank you Jason, she was all I had you know? Sophie said as her eyes became teary.

“I am sorry, ok. Do you have any picture of hers? Jason asked.

“Yeah, that’s her personal album on the table there.” Sophie said.

Jason went to the table and took the album. He opened it and instantly his face dropped, full of shock and surprise.

“Is that Nicky? Your sister? Jason anxiously asked.

“Yeah, do you know her? Sophie asked.

Apparently, Jason was Nicky’s first love, the guy who broke her virginity on her birthday and broke up with her.

Apparently, Jason was Nicky’s first love, the guy who broke her virginity on her birthday and broke up with her.

He had committed to a relationship he thought would be a successful one, only to find out in the end that it wasn’t what he was looking for. He wasn’t in love.

Jason believed that perhaps love would grow eventually between them. It however proved to be a lost cause. Having sex with Nicky made it worse and he knew this wasn’t something he wanted to continue with.

He felt guilty and obliged to continue the relationship but he also knew it was all a charade that would eventually backfire. He decided to come clean with her and seek for them to part ways.

That proved difficult for Nicky to take however, it was the only way out. Jason had always been upfront with her about his feelings. Nicky knew that Jason didn’t quite love her the way she wanted him to. She only hoped that with time, the love would grow.

In a desperate attempt to keep Jason, Nicky got him to sleep with her. He had resisted sleeping with her several times before but this one time, he found himself doing it without thinking. It really wasn’t enjoyable and they both regretted it after. Nicky wouldn’t say she didn’t enjoy it. She was so much in love with Jason that anything was all right with her. On Jason’s part though, he was ridden with guilt.

Sophie could tell from his face that Jason was hiding something. It was obvious that he knew Nicky from somewhere. Being that this was his first time to her house and she hadn’t seen him before, Sophie could never have guessed that there was more to the story.

“Jason, how do you know my sister?” Sophie anxiously asked.

“I think we should wait until the burial is over, then we can talk “ Jason said. He knew that Sophie would find it difficult to believe anything he would tell her in view of the present condition of her mind.

Meanwhile, Michael had arrived at his workplace. He fussed around at his table for a bit and went up to Joe’s office.

“I see you came in early today,” Joe said.

“I’m impressed. That’s a sign of a good worker” He continued.

“Thank you Sir” Michael said. He knew there was more to the compliment.

“Now Michael, what were you doing at Sophie’s end?” Joe asked.

Michael kept mute. He didn’t know what to say or the answer to give him.

“I asked you a question, Mr. Michael” said Joe.

“Sir, I couldn’t leave her all by herself knowing her condition. She was bereaved and needed someone beside her to at least console her. I know how much her sister meant to her being her only family member. Sir, I am sorry but that’s the least I could I do” Michael finally answered.

“How caring of you. I am so sure she appreciates your kind gesture.” Joe said sarcastically.

His comments drove Michael crazy. He couldn’t bear it any longer. He knew where this was going. He began pleading knowing full well that Joe would eventually arrive at that.

“Oh No Michael, I am not going to fire you, but this is your last chance. Trust me, the next time; even over a single rumor as regards you and Sophie, I will ensure you get fired. Get out of my office!” Joe said.

Michael with a sigh of relief wasted no time getting out of the office. As he got into his station, he saw Amah sitting behind his table. She apparently had been tracking him and knew to wait there for him.

After the encounter in Sophie’s house, Michael knew he had to come up with something tangible to assuage Amah.

Amah was one hell of a girl who had issues with anger management. She had a bad temper and didn’t even try controlling it.

Despite his denials, Michael and Amah did have something going on. Michael had come up with what he decided was the best route to go to quench this fire.

As he got close to Amah, Michael Suddenly knelt down before her and brought out a ring from his pocket. The exact same ring he had offered to Sophie. He opened his mouth and said to her: “Amah, will you marry me?”

Before he could finish talking, Amah slapped off the ring from his hand to the floor.

“You think you can be smart Michael! I am not just any girl you can fool around with like you do with the other girls. Now tell me: Are you the father of Ishmael, your brother’s son?