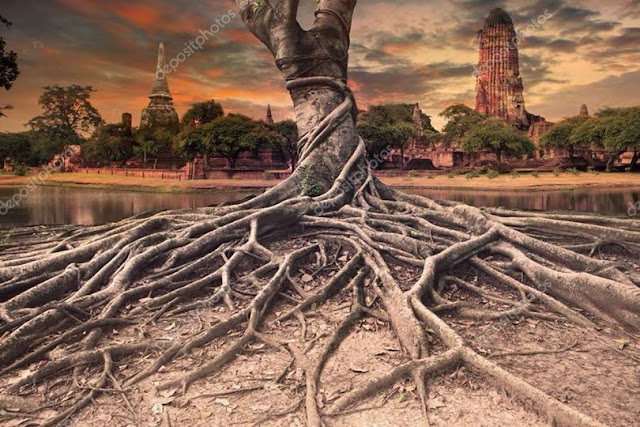 Ola watched on in regret as another scenario played out in front of her.
After Ola had influenced Pastor Ayo’s exit from Sukki’s land, Sukki sat helplessly on his farm.
While sitting down very confused, Another farmer walked up to him, telling him he could continue farming without uprooting the ancient root.
Ola watched as Sukki started planting on the rottenness and not regarding the big root. The root kept getting bigger and bigger. The rottenness on the ground increasing as well.
Sukki started planting regardless of the big root.
At a point, the Big root that had taken the form of a big tree crushed all the crops Sukki had been planting…
Ola wept sore as FATHER kept watching her… She saw what her unforgiveness had caused another human being.
She knew she was the cause of Sukki’s fornication even as a pastor.
He ought to have had his deliverance and the purging of his land, as soon as he had met Christ. Pastor Ayo would have helped him to pull out the big root from his land… That must have been Pastor Ayo’s Assignment in his life, but unfortunately, he did not fulfil that assignment…
“Well, he did…” FATHER said as he obviously had been listening to Ola’s thoughts…
“What Banke didn’t know was that Sunkanmi’s deliverance had a lot to do with her conception. My plan was for Ayo and Banke to help Sunkanmi clean his land before they could rest in their farm, but since they had not completed that task they had to wait for another 20 years before they had the opportunity of meeting Sunkanmi Again….
“ Mrs Banke’s infertility had something to do with Sukanmi’s salvation?” Ola wondered silently as she was seeing God for who He was... He was a divine strategist, a deep God, who is too wise to be completely understood...
******
Meanwhile, Austin had driven down to Sunkanmi’s house. He had been calling Pastor Sunkanmi’s phone for over an hour and he refused answering the call.
Sexy Sasha’s death had raised different eyebrows and knowing who his Pastor was, he knew Pastor Sunkanmi would be disturbed.
Sukki had met Austin in the Church he had joined after leaving Pastor Ayo, and they had become best of friends.
Austin respected Sukki because he knew God’s hand was upon him. When Sukki had pulled out to start his ministry, he had followed him willingly.
He and Sukki had relocated to Las Vegas to start the ministry. They had pulled a lot of crowd as the gospel they were preaching was a gospel that gave allowance for people to continue their sinful lifestyle. He and Sukki were deeply involved in all forms of immorality until Sukki had received a call from a Nigerian Number.
That Day, he and Sukki had been drinking alcohol in Sukki’s house after Sunday service. Sukki’s phone rang and on answering the call, the caller identified himself, Sukki’s countenance changed…He stayed silent on the phone for 15 minutes only saying “Yes Sir, Yes sir.”
After a while, he burst into tears….
After Sukki dropped the call, Austin kept asking who was that and what was wrong…
All he said was…
“Austin, we have missed it!”.
*********
Sukki knew who was knocking. He had been lying on the floor weeping uncontrollably for over an hour, asking God for Mercy…He stood up to open his door.
On seeing Sukki’s swollen red eyes, Austin knew his friend and pastor must have been crying before the Lord.
“I knew it”
“Do I have a choice?”
“You know it’s not your fault, some of these celebrities think since they have a large following they can run their mouths against God’s Anointed”
“She was only trying to air her feelings and warn her followers from following the wrong guy!’
“Is she God?”
“I actually raped and got her twin sister pregnant 25 years ago!’
Äustin froze …
“So you see why this is on me?” Sukki said as Austin relaxed into the chair he was sitting on…
“Nemesis had a way of catching up with people” Austin reasoned bitterly.
To be continued
For your support and encouragement towards releasing the full episode online for FREE, kindly make your donations to
Account Details:
Opeyemi Akintunde
0147974098
GTB
( International donations also welcomed)
To buy the full soft copy ( E- novel) send a WhatsApp message to ‭+234 906 992 6797‬ or +234-8151103646.
DEEP THOTS NOVELS
INSPIRED BY THE HOLY ONE
Written by Opeyemi O.Akintunde
+234-8151103646
FOLLOW THE AUTHOR FOR MORE LIFE CHANGING STORIES ON:
FACEBOOK@OPEYEMI OJERINDE AKINTUNDE-OFFICIAL
Photo credit : Internet
See Also :